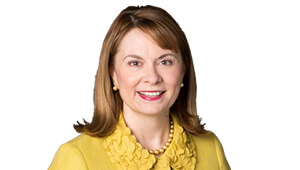 Dawn Rogers has been named Executive Vice President of Human Resources at Pfizer, effective June 1, 2018. Her experience spans Pfizer’s global business, including HR leadership roles in Commercial in both developed and emerging markets; Research and Development; and Enabling Functions.

Dawn joined Pfizer in 1999 as Senior Director, HR Lead, for U.S. Sales. From 2000 to 2006, she played a key role in the integration of the field forces during both the Warner-Lambert and Pharmacia acquisitions. From 2006 to 2008, Dawn was the VP of HR for Pfizer's European Commercial Operations where she co-led the efforts to establish business units in Europe. From 2008 to 2011, she was a member of the WRD Leadership Team where she led the Wyeth R&D integration and helped to build a world-class team of scientific talent. In 2011, Dawn was appointed SVP of HR for the Primary Care Business Unit, where she co-led the restructuring of the commercial businesses and integration the emerging markets. In 2013, she became the SVP of HR for the Global Innovative Pharma Business; and in 2016, SVP of HR for Pfizer Essential Health, Global Product Development, and the Legal and Compliance Divisions. In November 2017, Dawn was appointed as the SVP of HR for the Chief Operating Officer with responsibility for Commercial, Global Product Development, Pfizer Global Supply, Corporate Strategy, and Legal and Compliance.

欧洲杯竞猜Prior to joining Pfizer, Dawn spent 11 years in Human Resources at Serono and three years at Kos Pharmaceuticals, a start-up company, where she built their commercial organization in preparation for the first product launch and an IPO. She holds a BA in Psychology and an MA in Management. She lives in Hoboken, New Jersey, and Center Valley, Pennsylvania, with her husband, John, and their two sons.